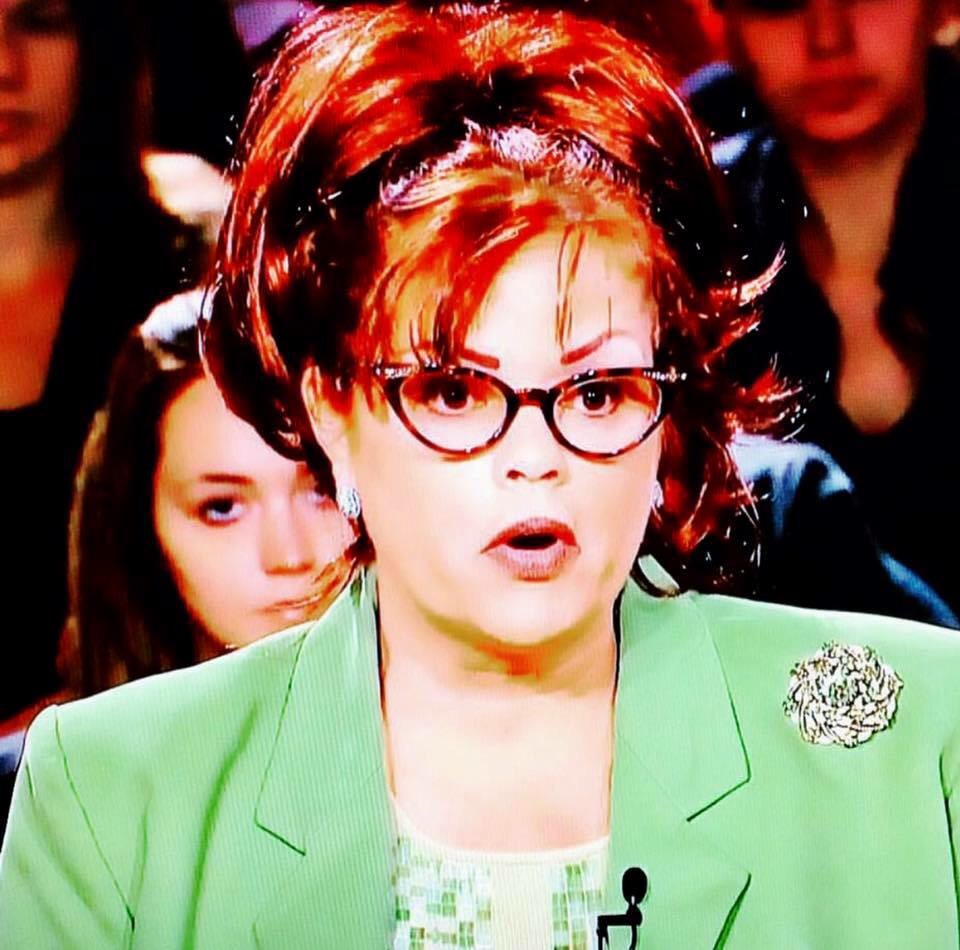 Last night my Ferguson Unit Bride sent me a text. I was saddened to hear that she was planning to cancel her wedding scheduled for January 16th @1PM due to financial difficulties. Alarmed, I called her. She was crying and I told her to calm down that I wasn’t going to cancel.

This decision is one that most likely no one else would make but, what makes me different also makes me far more sought after. I advised my Bride that she could pay out the balance and send a small deposit instead.

Ferguson Unit is about three hours one way from Fort Worth. My last visit to Ferguson was a bit of a surprise because it was the first time that the inmate was behind glass. I wasn’t expecting this and after walking into the visitation area with my Client, felt saddened that my Bride wouldn’t be able to kiss her Groom.

Apparently, my Client wasn’t nearly as bothered by the glass as I was and she loved the photo of them together that merged their faces. Since I’ve been asked if inmates can hear and understand the ceremony, the answer is yes.

Occasionally, there is a phone that my client and I take turns talking into but usually, there’s a small opening under the glass. Leaving Ferguson Unit, I was grappling with the glass in my mind and wishing my client could have held hands or even hugged her new husband but, my Client wasn’t upset by the glass. It was only I who felt sad about the circumstances.

My niece, Leigh Ann was waiting for me in the parking lot and asked “what’s wrong?” I told her that the glass had scared me initially as to whether the inmate could understand the ceremony and secondly I was hoping my bride could at least “seal the deal with a kiss.” 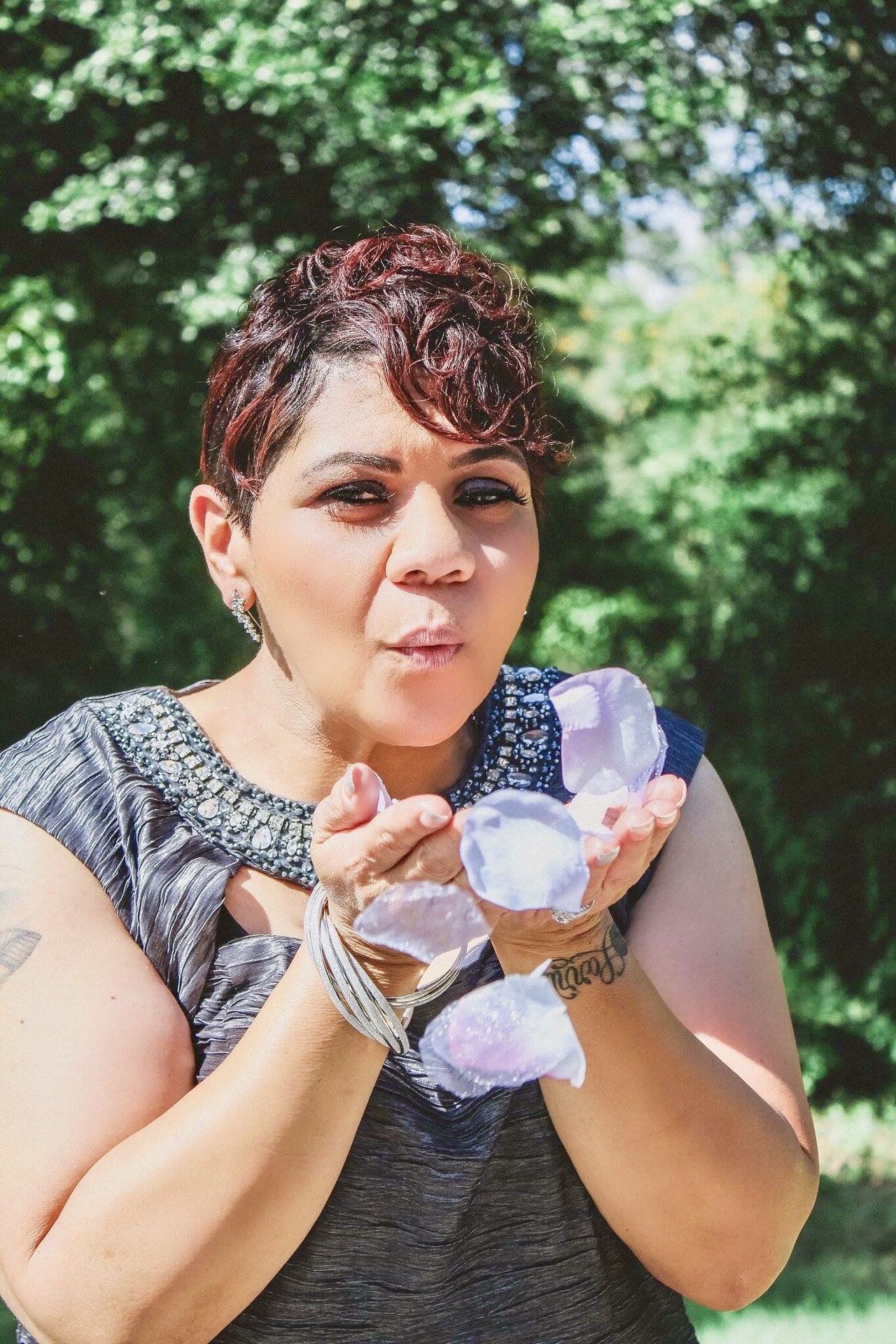 A few miles away from the Unit, we pulled over and began unloading many of the items I had packed for our “rolling photo booth.”

Although my heart was heavy about the glass, it wasn’t at all weighing heavily on my client who had a great time with us and was thrilled to finally be married. 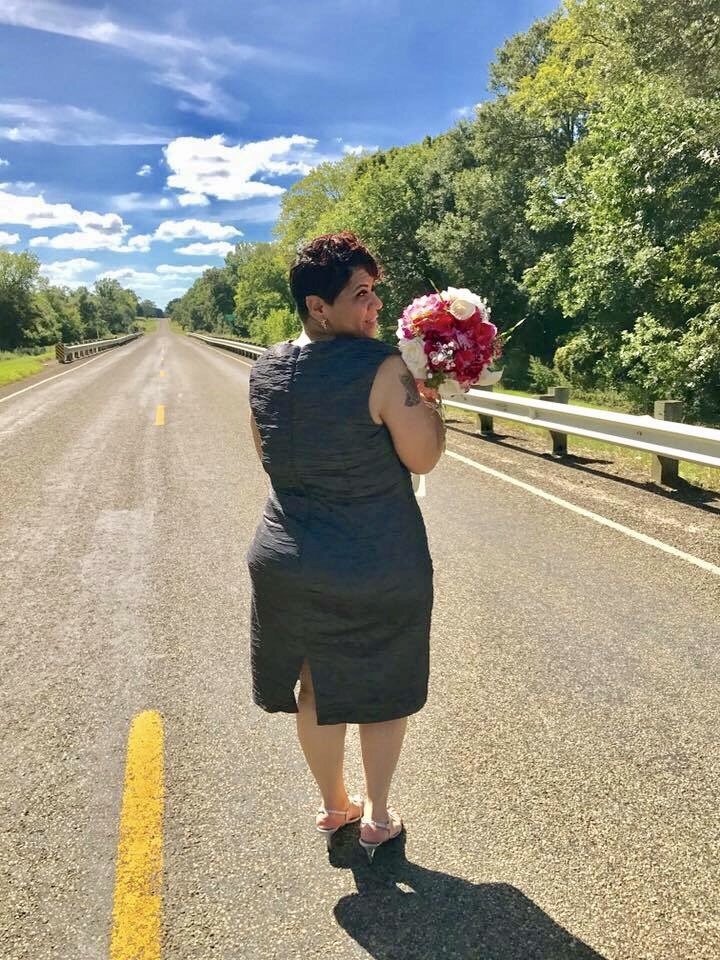 I have learned to put my own feelings aside for weddings that take place in less than celebratory locations from a prison or even a hospital death bed.

Years ago, someone contacted me who wasn’t expected to live. They wanted to marry their partner from the confines of a hospital bed in order to leave their worldly possessions to them via marriage.

I’ve also given Last Rites at area hospitals for many years. Most people requesting Last Rites were often not religious throughout their life. However, I’ve learned that when near death, religious preferences change dramatically. I don’t judge anyone. In fact, I believe that it’s better to find faith late than it is to never find it.

For over an hour, my joyous client continued to text me. She couldn’t believe that I would make an exception. But, I don’t “have” to work. I haven’t in many years. I trust my clients. We’ve built a relationship together. I know that my client will make good on her promise and I could hear how devastated she was about the change of her financial situation in her voice. I’m “everyone’s mother” on a regular basis.

Walking into a Prison with a nervous client, they know that I will be with them every step of the way. They are all nervous. They never expected to be marrying at a Texas Prison either. Who would?

My clients know the Unit and are familiar with the screening process. I was never alone and this helped ease my wild imagination regarding what to expect more than anyone realized.

When I agreed to undergo the screening process for Misty two years ago, I was perhaps far more nervous about walking into a prison than Misty realized. The only Prisons I had ever seen were from Texas highways or on television.

I had actually met Misty before undergoing the process and again before the wedding for her bridal photo shoot. Back then, Estes didn’t allow photos at weddings. They now do. 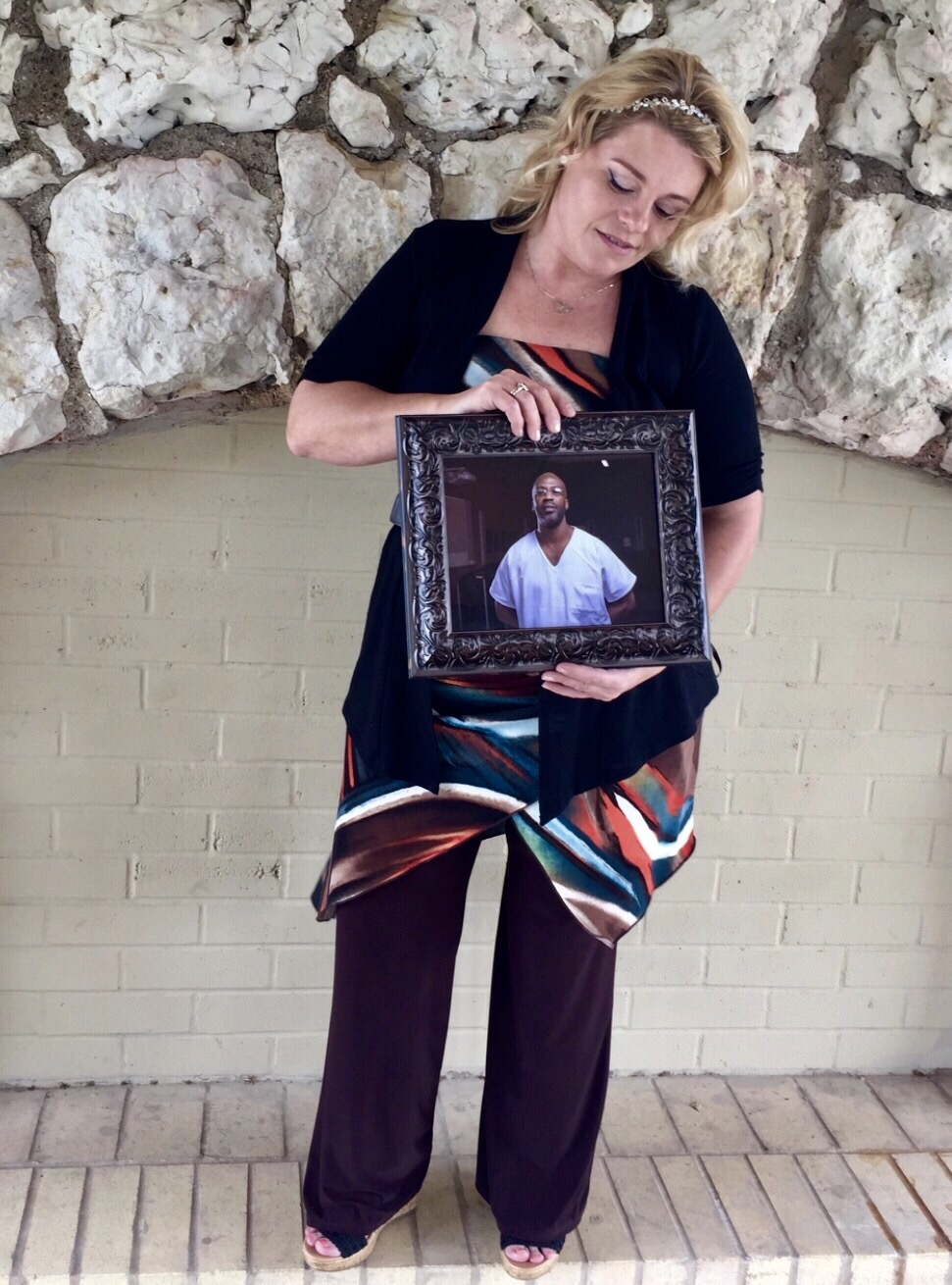 By divine intervention perhaps, Estes Unit was a minimum security prison. Driving in, I wondered where the guards were? The dogs? The razor wire? Who was keeping everyone in or out? But, my relief at what wasn’t what I had expected would “turn” less than a week later at TDCJ Michael Unit.

At Estes, we were cleared and escorted to the visitation area. Most Units have beautifully painted walls that provide a backdrop. Estes did. The steel door slamming behind did cause me to jump a bit but, I didn’t have a heart attack or panic that we wouldn’t be able to leave.

Misty calmed me significantly without even realizing it. I was inside my very first prison. I wasn’t hyperventilating and I wasn’t worried about a riot. These thoughts had kept me awake for days prior to my first Prison wedding. My thoughts and fears were unfounded.

I also realized that Prison Weddings were scheduled during the week because the ceremony generally takes place in the visitation area. The visitation area is used on weekends and therefore unavailable.

At the time I agreed to help Misty and become a TDCJ Approved Officiant, all of my events or bookings were on weekends or evenings making Prison Weddings “a perfect fit” for my schedule. Shocking right? I couldn’t believe it myself.

Prison weddings were so easy to squeeze into my schedule that I decided to expand Texas Twins Events to include Texas Prison Weddings. Two years later, I do far more Prison Weddings than any other event booking. Prior to Prison Weddings, half of my Client base was LBGT. 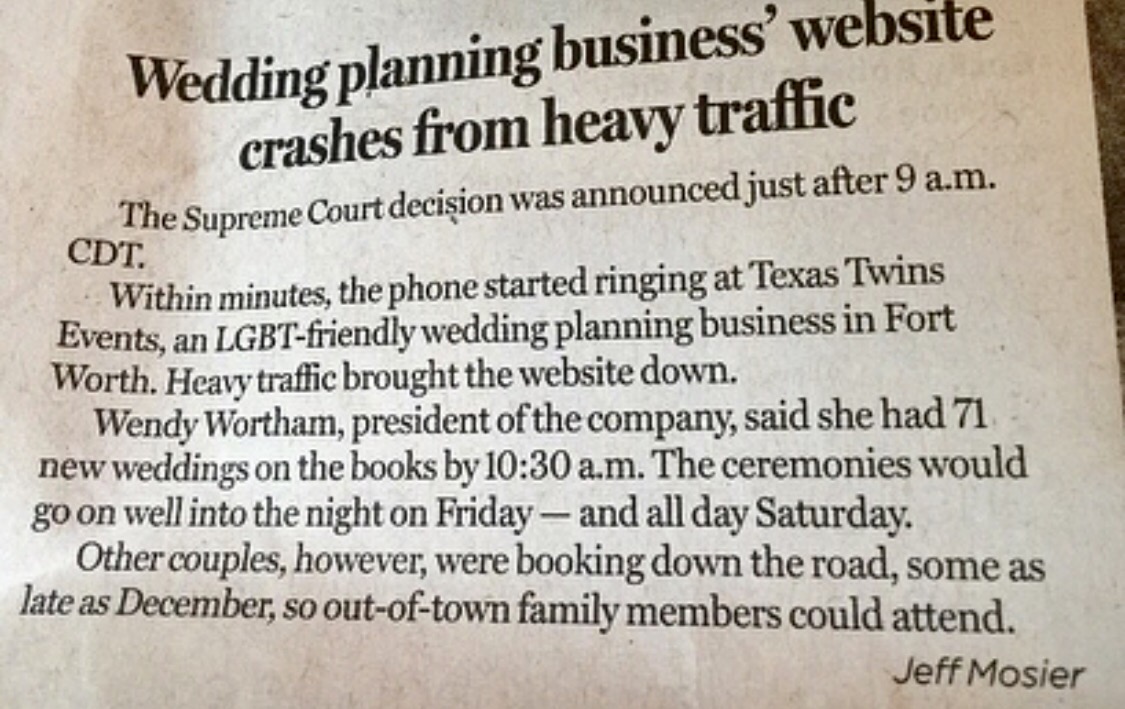 Did I know two years ago that Prison Weddings would occupy up to 85 percent of new bookings? No. Who would? I had no idea how many people wanted to marry an inmate. But, between my bookings at venues and existing client bases for Texas Twins Events and The Pawning Planners, Texas Prison Wedding bookings would add a completely different dimension to my Client base. 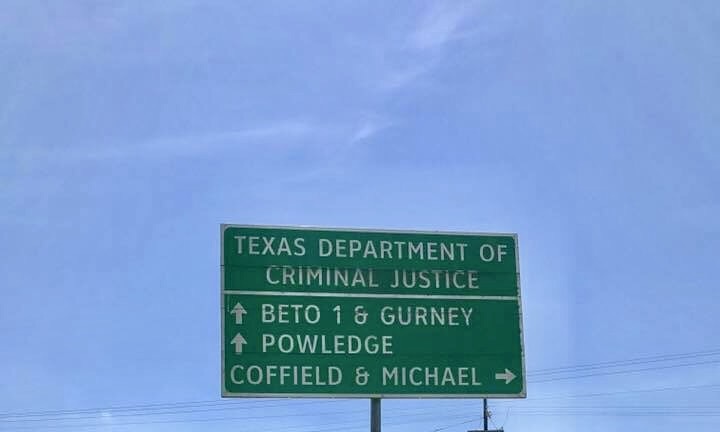 I was shocked by this and the sign rolling into town that listed all of the Units in a small country town with only one convenience store. The store was unlike any I’ve ever been to. There was a barber shop. There was a cleaners. There was a grill. There was also plumbing supplies being sold next to milk and eggs.

The General store was a surprising pit stop for not only me but also my twin sister who was going to wait for me while shopping at this out of the way country store.

I had expected Michael Unit to be just like Estes Unit with a nice parking lot and couldn’t have been more shocked driving into the Unit by the remarkable differences between Estes and Michael.

TDCJ Michael Unit had a guard shack. Michael Unit also had razor wire and everything that I had expected Estes to have. Yes, I was at a maximum security unit. The variations between minimum and maximum are significant. My fear of a riot or being locked in returned tenfold.

Trying to control my breathing, I was SO THANKFUL that Trishelle had offered to let me ride to the unit with her there are no words to express my relief. The glistening razor wire in the Texas sun was blinding. I actually held Trishelle’a hand to steady my frazzled nerves. Wobbly legs aside, Trishelle was comfortable about walking me into my first maximum security unit.

Michael Unit was similar to the Prisons I had seen on TV. It was intimidating to say the least. Since then, I’ve been in many maximum security units including Death Row Prisons. I’ve overcome my claustrophobia and I’ve learned that I’m safer in a Prison than anywhere else. 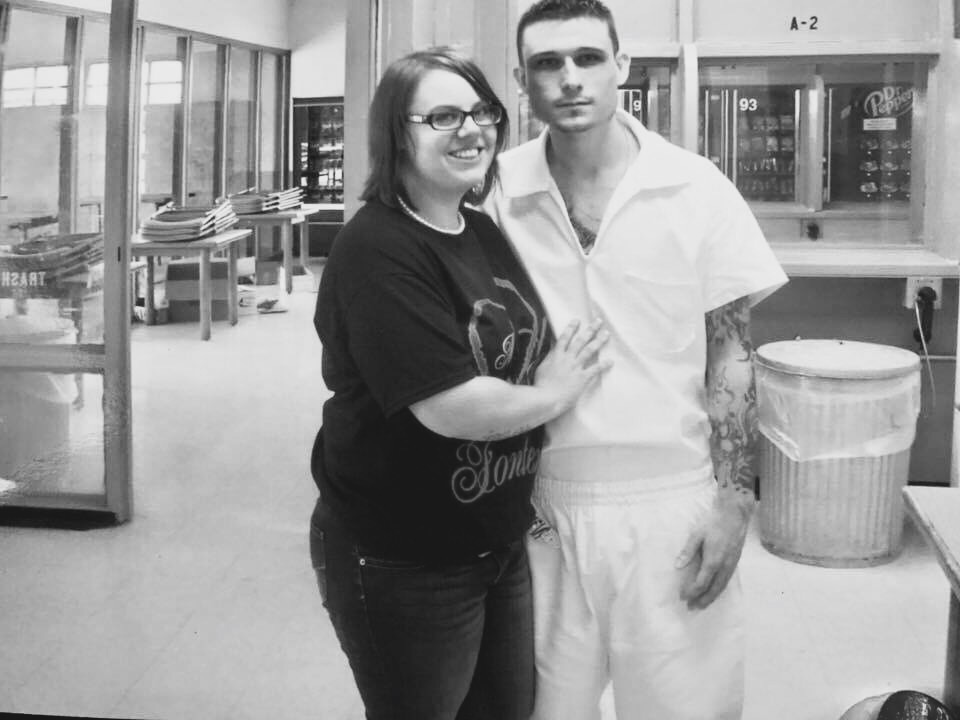 Trishelle had dropped her mother and friends with Cindy to wait for us while inside the Unit. I was so thankful that I wasn’t alone removing my shoes and blazer that I didn’t lose my balance and trip or start hyperventilating you have no idea.

Trishelle was comfortable and not at all intimidated. Walking into the visitation area with vending machine trash surrounding us, I couldn’t “get over” where the ceremony would be taking place. I asked to move the trash around our feet away from the couple before proceeding with the ceremony. The trash bothered me.

Riding back to the General store, I was relieved to be leaving the first maximum security unit I had ever been inside. I was thankful that I didn’t walk in alone. I managed to keep my composure and put my fear at bay. I had done it! Thank God for Trishelle.

My relief at getting through my first maximum security unit wedding ceremony was behind me as Trishelle and her group jumped in for fun wedding photos. My mini photo sessions are a celebration for clients. 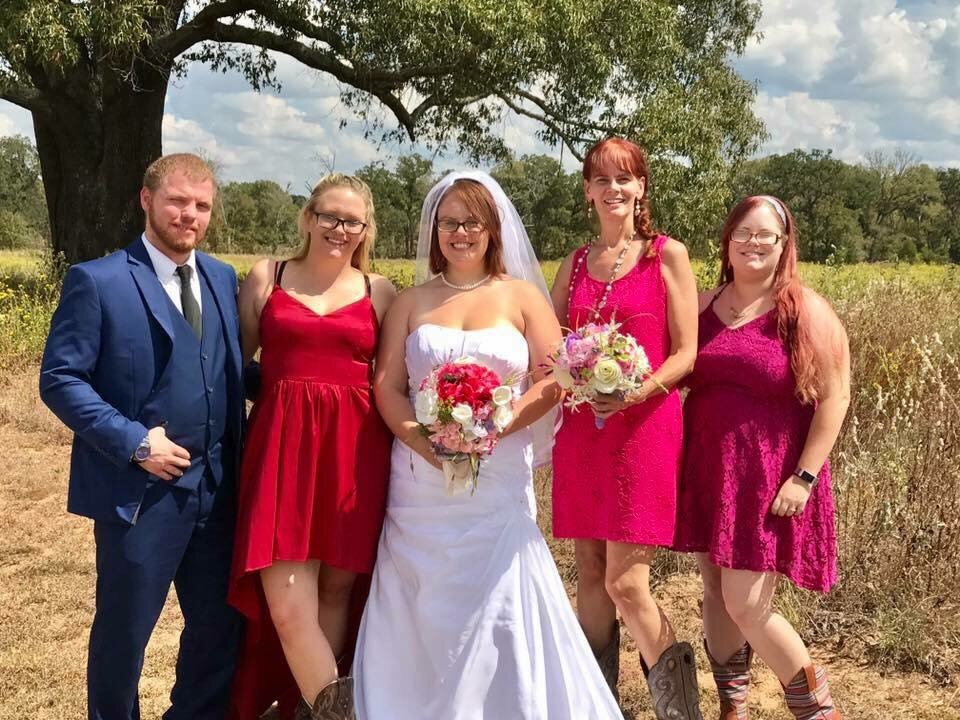 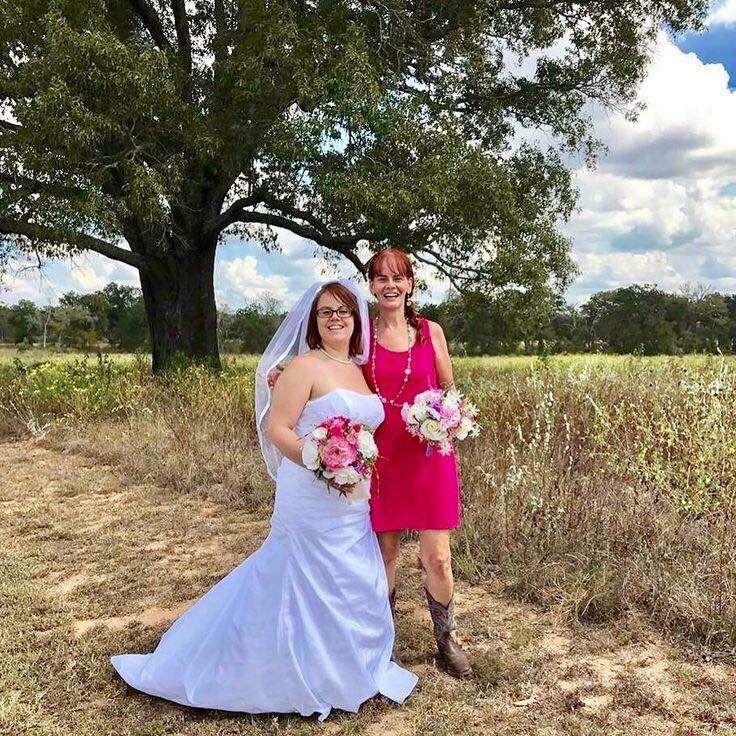 I’ve created an extensive inventory of wedding dresses, bouquets, boutenniers and other items that my clients love to borrow.

What made me different made me successful. Having an identical twin and partner, we look forward to more road trips and rest areas.

Cindy and I have met some pretty amazing people and along the way, we have also learned that working together was the best decision we could have ever made…